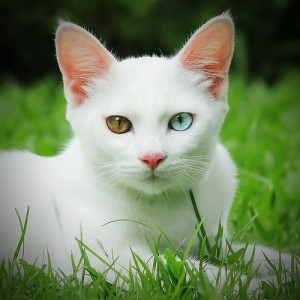 The Khaomanee or Khao Manee cat (Thai: ขาวมณี – meaning “White Gem”), also known as the Diamond Eye cat, is a rare breed of cat originating in Thailand, which has an ancient ancestry tracing back hundreds of years. They are mentioned in the Tamra Maew, or Cat Book Poems. Khao Manee cats are pure white with a short, smooth, close-lying coat. They can have blue eyes, gold eyes or odd eyes with one of each colour. The odd eyed Khao Manee is the preferred variety. They are muscular, athletic cats of moderate foreign type and are reputed to be active, communicative and intelligent.

With one blue eye and one eye ranging from copper through yellow to green, this shining white cat from Thailand captures the imagination. Khaomanee (sometimes seen as Khao Manee) means White Gem and is thought to have been a favorite in the royal palaces. A heart-shaped face with high cheekbones and a brilliant white coat like diamonds belie the naughtiness of the-se stunning cats but their devotion to you will have you admiring the naughtiness that these intelligent cats so enjoy as they entertain you with their antics.

Several related breeds have their origins, ancient origins, in Thailand. The Siamese (Wichien-maat), the Burmese (Suphalak), and the Korat (Dork Lao)—and the Khaomanee. The first three breeds are well-established in the West but the Khaomanee has remained a well-kept secret in its native Thailand. Like the other breeds, we find references to the Khaomanee in the Tamra Maew (an ancient collection of Thai cat poems from 1350) although in that text it is called the Khao Plort. While the eyes were originally referred to as the color of mercury, the eye color was changed to reflect the odd-eyed cats that were considered lucky and also to have the yellow eyes like canary diamonds that breeders also favored.

Interest in these striking cats has grown in the West and in 1999 Colleen Freymouth imported the first Khaomanee cat, Sripia, from Thailand to the US. She also imported a male and bred the first Khaomanee litter in North America. Janet Poulsen (Odyssey cattery) exported the first Khaomanee cat to the UK and interest in the breed is growing there as breeders import more of these stunning cats from Thailand to continue developing the breed. TICA accepted the Khao Manee cat for Registration Only status in May 2009 and in September 2011 moved to the next step in gaining full breed recognition, Preliminary New Breed, effective May 2012.

The regal appearance of the Khaomanee cat strikes one instantly but they have a playful sense of naughtiness. They love people and are devoted to their owners but see themselves as the greeter for all who enter the home. No-one will escape the graceful attentions of this welcom-ing host but when the party is over, your Khaomanee cat will curl up with you and take a peaceful break to enjoy your company. They are curious, intelligent cats and like nothing better than a game of Fetch with you—and that keeps their bodies lithe and muscular under the shining white coat.

The heart-shaped head with its high cheekbones provides an ideal setting for the jewel-like eyes that are so characteristic of the Khaomanee cat. The ears are large and upright giving the cat an alert appearance that matches its inquisitive personality. While the preferred eye color is the odd-eye with one blue eye and one yellow eye, the Khaomanee cat can have one blue eye and one ranging from yellow all the way to green—and in some cases it will have even eyes of yellow or green. The shining white coat is another key characteristic of the breed however there may be kittens of other colors in the litter and the same heart-shaped head and shining coat are char-acteristics of these cats as well.

The KhaoManee was said to be kept and bred initially by Siam royals, as it was with other rare colored cats such as the Siamese. Breeders in Thailand, are promoting and breeding the KhaoManee cat in the effort of preserving its lineage, and breed standard. The first Khao Manee cat imported to the United States occured was in 1999 when Colleen Freymouth imported a Khao Manee by the name of Sripia. Breeders in the west are working to promote and establish foundation lines for the Khao Manee, as well as acquire registration acceptance through several cat associations.

Skin cancer may affect any cat with white ears.

There has been a very high percentage of cats with kinked tails amongst the cats exported from Thailand.