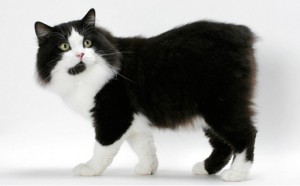 History
Presumed by researchers to have been introduced to the Isle of Man by human settlers and explorers, the Manx has existed there for many centuries. The Isle, located in the Irish Sea between England and Ireland, has no indigenous domestic cat species, and several theories exist about the introduction of domestic cats. Speculated sources include arrival with the Spanish Armada, Phoenician traders, or Viking settlers who colonized the Isle of Man. Many fanciers believe the British Shorthair was later added to the Manx mix. Given the proximity of the regions and the similarity in body styles, that’s not an unreasonable theory.

Records have been found that describe the cat as a mutation among the island’s domestic cats, rather than a cat that arrived with its tail already absent. In this case, the lack of tail is governed by a dominant gene, unlike most other breeds with short tails. This indicates that the Manx and the Cymric (KIM-ric) are not related to breeds such as the Japanese Bobtail whose tails are governed by recessive genes.

Wherever they came from and whatever their genetic makeup, fanciers took note of the Manx and it soon became a popular breed in the earliest days of the cat fancy. Manx cats are noted in early American cat registry records as well.

Although a relative newcomer to the cat fancy, the Cymric apparently has been around as long as the Manx itself. Fanciers insist that the Cymric is not a human-made hybrid as has been suggested (Manx to Persian outcrossing apparently occurred in the 1930s and 1940s), but rather a variation of the Manx breed with a history as long and rich as that of the Manx. Since the Isle of Man possessed both shorthaired and longhaired cats, it’s presumed that the longhair gene passed around by inbreeding on the Isle itself, just as was the Manx gene. Unlike the Manx gene, however, long hair is a recessive trait, and the gene could be carried unnoticed through generations of Manx.

While the Cymric was shown in ACA as early as 1963, the breed didn’t really begin to take hold until the mid-1970s. First shown under the name Longhaired Manx, the name was changed to Cymric during this period. The word is the Welsh name for Wales and was chosen by pioneer Cymric breeders Blair Wright and Leslie Falteisek.

In May 1994 the CFA changed the name from Cymric to Longhaired Manx because the CFA breeders thought the Cymric should be considered part of the Manx breed. Longhaired kittens born to Manx parents (possible when both parents carry the gene for long hair) can be registered as Cymric cats in all associations except CFF. This eliminates status problems with the “split litters” in which both hair lengths are present.

The Cymric and the Manx are two of the most challenging to breed because of the Manx gene. Cymric embryos that are homozygous (inheriting the Manx gene from both parents) die in the womb. Homozygous kittens comprise roughly one fourth of the kittens conceived; therefore, Cymric litters are usually small. Even heterozygous kittens can have deformities such as spina bifida, fusions of the spine, and defects of the colon. Careful breeding helps minimize the defects.

The personality of the Cymric has won a strong following despite the breeding challenges. Cymric cats are intelligent, fun-loving cats, and they get along well with other pets, including dogs. Cymric cats are particularly noted for their loyalty to their humans and enjoy spending quality time with them. As cats go, they can be easily taught tricks. Despite their playful temperament, they are gentle and nonaggressive. Their playful yet tractable dispositions are good for families with children.

Cymric cats are powerful jumpers and if sufficiently motivated will manage to breach the most secure shelf. They are also fascinated by water, as long as you don’t dunk them in the nasty stuff. Perhaps this fascination comes from originating on a small piece of land surrounded by it.

Cymric cats come in a variety of tail lengths. The tail types are broken into four classifications: rumpy, rumpy-riser, stumpy, and longy. Since the tailless gene is dominant, all Cymric cats that possess the Manx gene will have one of the four tail types. Rumpies are completely tailless and are prized because they can compete successfully in the show ring. They often have a dimple at the base of the spine where the tail would be if it were present. Rumpy-risers that possess a short knob of tail, stumpies that have an often curved or kinked tail stump, and longies that have tails almost as long as that of an average cat are used for breeding or are sold as pets. Many breeders dock the tails of the longies to make it easier to find homes for them.

General: The overall impression of the Cymric is that of roundness.

Head: Round head with prominent cheeks; in profile, head is medium in length with gentle dip from forehead to nose; well-developed muzzle; strong chin; definite whisker breaks with large, round whisker pads.

Eyes: Large, round, and full; set at slight angle toward nose. Color depends upon coat color.

Tail: Appearing absolute in perfect specimen. A rise of bone at the end of the spine is allowed unless it stops the judge’s hand.

Color: Any color except those indicating hybridization resulting in the colors chocolate, lavender, the Himalayan pattern, or these combinations with white.

There’re plenty of information about cool cymric cat https://catspro.com/cymric-cat.html! If I didn’t have a one, I would defenitely buy this!